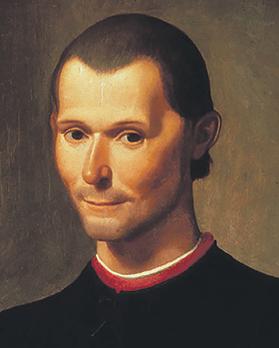 Santi di Tito’s portrait of Niccolò Machiavelli, who is considered as the founder of modern political science. He described immoral behaviour as normal and effective in politics and is famous for his book The Prince.

In 1908, G.K. Chesterton wrote the following reflection in his masterpiece Orthodoxy: “When the businessman rebukes the idealism of his office boy, it is commonly in some such speech as this: “Ah! Yes, when one is young, one has these ideals in the abstract and these castles in the air; but in middle age they all break up like clouds, and one comes down to a belief in practical politics, to  using the machinery one has and getting on with the world as it is.

“Thus, at least, venerable and philanthropic old men now in their honoured graves, used to talk to me when I was a boy. But since then I have grown up and have discovered that these philanthropic old men were telling lies. What has really happened is exactly the opposite of what they said would happen. They said that I should lose my ideals and begin to believe in the methods of practical politicians.

“Now, I have not lost my ideals in the least; my faith in fundamentals is exactly what it always was. What I have lost is my old child-like faith in practical politics.”

No doubt, many of us can relate with such a powerful observation, especially in the light of repeated exposure of sleaze and corruption that at long last seems to shock our undemanding electorate. The sad reality is that too often such exposures seem to be only exploited for partisan gain and are not the result of a firm commitment to clean out the encrustations of dishonesty that clog the corridors of power.

In politics, the only thing that seems to count is electoral success, and at all costs

Many of us are aware of government decisions that are anything but even-handed. Justice seems to be a slogan dragged out from time to time to score points against the opposing party. Yet those who had property or businesses expropriated or have been denied rightful permits, employment or promotions, are acutely aware of how unjust those in power can be.

To add insult to injury, seeking redress in the courts of law is too often, and at best an exercise in futi­lity, and at worst a drain on time and money that leaves the injured party worse off. The absence of moral uprightness in business and the political arena reflects poorly on the level of our country’s catechesis.

In politics, the only thing that seems to count is electoral success, and at all costs. This seems to give our politicians carte blanche to use any means to achieve power. Sadly, the politics of Machiavelli seem to be well entrenched. I am sure that there are politicians in both our major parties who deep down disagree with the shabby manoeuvring and bad political decisions made by their own leaders, especially decisions that are made without any political mandate whatsoever.

Nowhere is this more conspicuous than in the single-minded imposition of the LGBT agenda in recent years by the government in power that unreservedly champions their agenda. The logic behind it is obvious. The LGBTs are well organised and well financed. Unfortunately, they are only concerned with their own narrow interests irrespective of how this impacts the common good.

Even the Leader of the Opposition has succumbed to the blackmail politics of the powerful LGBT lobby. He seems unbelievably unaware or indifferent to the long-term negative impact this will have on family life which has been steadily unravelling as too many Maltese jettison the Christian values that once underpinned our society.

As the remarkable Rabbi Jona­than Sacks said six years ago, the freedoms we take for granted are based on our Judaeo-Christian heritage that was rooted in moral absolutes that included the non-negotiable dignity of the human person, the sanctity of human life, and the imperative of conscience and the consent of the governed. Today, every one of them is at risk.

Thankfully, there are signs that an alliance of new political forces are reacting to this sad state of affairs. Hopefully they will live up to authentic democratic values and not give in to blackmail from any quarter.