A recent research study has found that women taking oral contraceptives are attracted to faces that look less masculine. Anthony Little and colleagues found that after about three months on the “pill”, women started to prefer men who look more feminine. The figure below shows the face of a man (top row) and a woman (bottom row). The women on the “pill” preferred the man’s face on the left to the one on the right. They did not have any specific preference between the women’s faces however. The faces below are digitally altered so the right images look more masculine than the left ones. 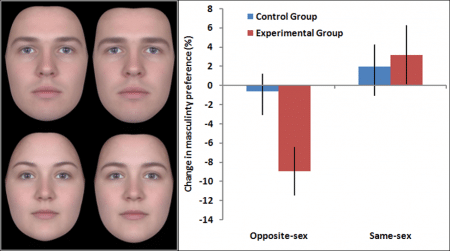 Dr Craig Roberts of the University of Stirling and others have recently reviewed a growing body of research showing that the choice of partner a woman makes changes through the menstrual cycle. At the time of ovulation, when a woman is most fertile, she prefers a more masculine and genetically unrelated man. The “pill“ removes this natural preference and women on the pill show instead a preference for men with more feminine facial appearance and voice. Craig Roberts says that these studies taken together show that oral contraceptives alter women’s mate preference judgments. They have the potential to influence the partner that a single woman chooses. If a woman stops using oral contraceptives her attraction to her partner may also alter. A further factor that could affect the stability of marriage is that partnered women report higher levels of jealousy when on the “pill”. This was recently reported in the journal Evolution and Human Behavior by Kelly Cobey and colleagues. Oral contraceptive use could ultimately affect the stability of relationships.

It is possible that these factors could explain a link between the contraceptive pill and divorce. The contraceptive pill was first marketed in 1960 and by 1965, 26% of married women in the USA had used it. The divorce rate started to increase about 5 years later and doubled from 25% to 50%, between 1965 and 1975 (see figure). In 1978, Robert Michael of Stanford University showed that contraceptive use accounted for 45% of this increase in divorce. These new data make further research on the link between divorce and the “pill” essential and urgent.  (Figure from http://www.thatmarriedcouple.com/2013/02/contraception-correlations.html) 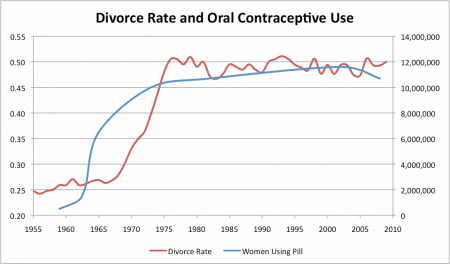 Neurobiological research is beginning to reveal that oral contraceptives produce alterations in several fundamental brain processes. For example, combined oral contraceptives alter sexual desire in 23% of users (15% decreased and 8% increased). Also about 10% of women on the pill have disturbances of mood, like depression, and it was found that in these women, the normal response to emotion is decreased in some brain areas on functional brain imaging.

We are increasingly finding out that oral contraceptives have widespread effects on brain pathways, quite apart from their direct effects on the body. The fact that the pill is taken regularly on a daily basis for a long period of time, means that a woman’s behaviour is effectively altered over a very important part of their lives emotionally, a time when they are making choices about a lifelong partner. Since the brain pathways affected include those that are central to mate preference and emotional learning there is a danger that use of the “pill” may negatively influence the choice of partner. It is important that women are fully educated about these effects of the oral contraceptive and the potentially devastating effects they could have on their lives.