Give a voice to the unborn: massive protest against government proposals on embryo freezing

Home > Malta > Give a voice to the unborn: massive protest against government proposals on embryo freezing 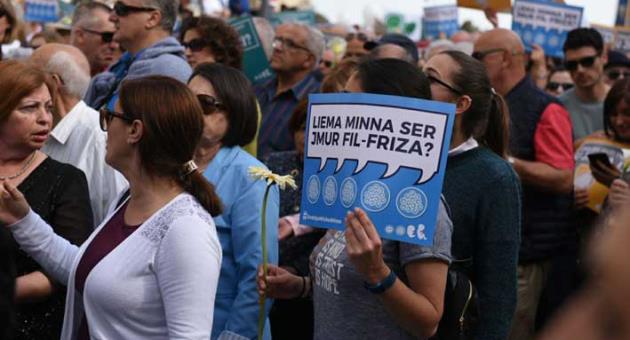 A massive crowd gathered on Sunday afternoon to protest against the government’s proposals to introduce embryo freezing tied with anonymous adoption.

People held placards saying ‘I am not an object’ and ‘don’t freeze me’.

The “manifestation” has been organize by pro-life group ‘The Life Network’, who were also against the Morning After Pill which was legalized last year.

Many older people were in attendance, together with many religious people, priests and nuns. 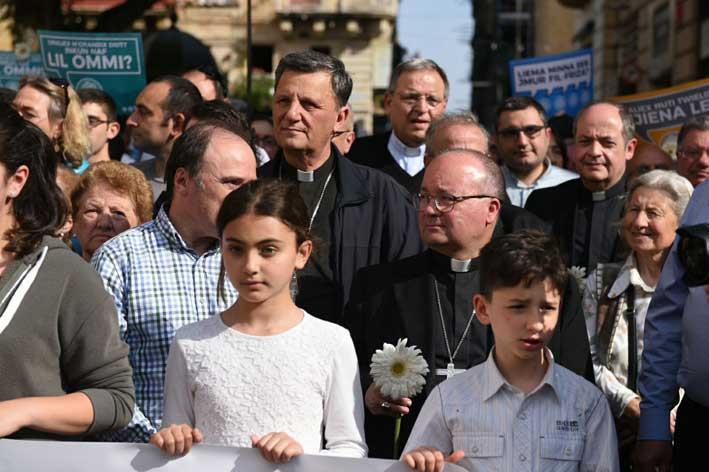 Parliament is debating government proposals to introduce embryo freezing tied to anonymous adoption, open up IVF to gay couples and individual people, and therefore would launch sperm and ovum banks. A decriminalization of non-commercial surrogacy is also being proposed.

It is understood that protestors mainly take issue with the “objectification” of human life through embryo freezing and the ethical implication tied to anonymous adoption of embryos.

Those in attendance held white flowers to represent the “babies” which do not have a voice. One woman said the flowers represent the embryos who would be frozen.

The flowers are to be placed in front of parliament as a message of protest.

In comments to this newsroom, one protestor remarked that embryos are not objects, and human life is not being respected through the freezing of embryos.

Other placards read “shouldn’t I know who my mother is?”

The crowds sang ‘hallelujah’ along with a band present. There was a light atmosphere with everybody singing and clapping hands.

Protestors left Castille square to walk Merchant street. They turned onto Republic Street and placed flowers in front of Parliament building, which was cordoned off by police barriers.

One nun could be seen holding baby shoes to “give a voice to the unborn”. 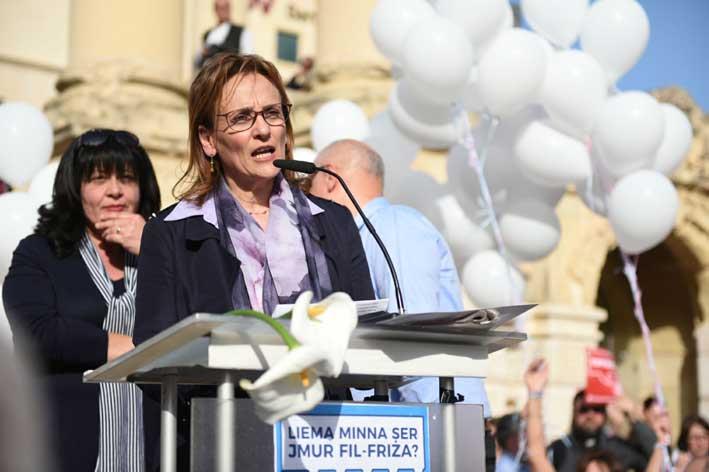 Miriam Sciberras, a prominent pro-life advocate asked protestors to place single baby shoes in front of Parliament to signify all the embryos that will be frozen.

Leader of the Patrijotti Maltin, Henry Battistino was also in attendance.

Miriam Sciberras encouraged protestors to take a ‘selfie’, upload it to Facebook accompanied by the hashtag ‘MovementForLife’.

Thousands gathered before Parliament to show their opposition to the proposed embryo freezing legal amendments.

The first speaker, Dr Joseph Mizzi said he is in favor of life and he is not alone. He stressed couples facing fertility issues deserve support and IVF treatment. He said he is against embryo freezing, because it goes against the rights of parents and babies themselves.

He said that embryos will be viewed as products, with some chosen to be born and some arbitrarily chosen to be frozen.

He said many of the frozen embryos end up dying, and for those which are adopted , this is discrimination by the parents.

A married man with two children spoke at the protest, who had been born in an institute and adopted by a Maltese women. He spoke of how a chapter in his life remained open until he found his biological parents, despite having a lot of love at home. Protestors are against anonymous adoption of embryos because they feel the embryo is being discriminated against and that it has a right to know who it’s biological parents are.

A British doctor named Joanna Ross, who Miriam Sciberras said is a sibling of about 300 people as part of anonymous embryo protection, addressed the crowd. She spoke of her sadness about her children not knowing who their maternal grandparents are due to anonymous embryo adoption.

She called anonymous donor conception a “social experiment”, saying it is not normal.

“Anonymous donation is so wrong,” she said.

She spoke of the problems of not knowing our genetic family when health issues arise and medical donations are needed.

Health Minister Chris Fearne had said if the adopted embryo is born, when it reaches the age of 16 it would have access to the medical records of their genetic parents would be made available.

Miriam Sciberras took the stand to say the issue goes beyond partisan politics, adding that the majority of people in Malta are in favour of protecting human life.

She said that embryo freezing is only acceptable in exceptional situations, as is currently the law. 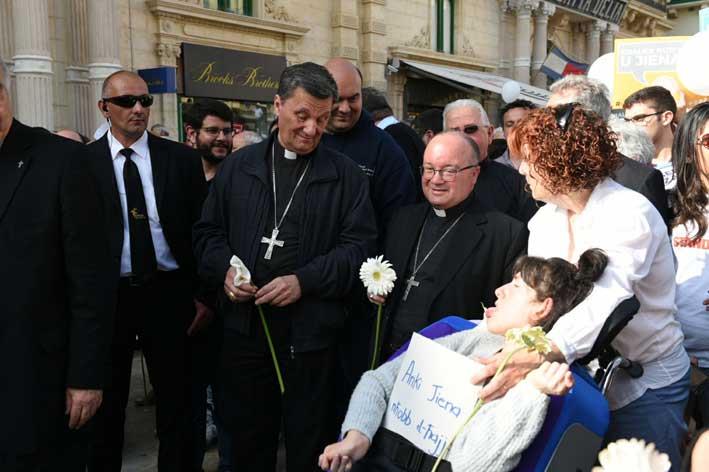 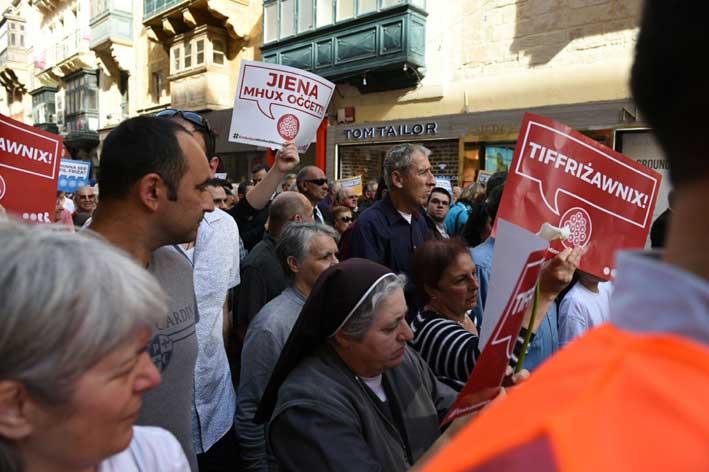 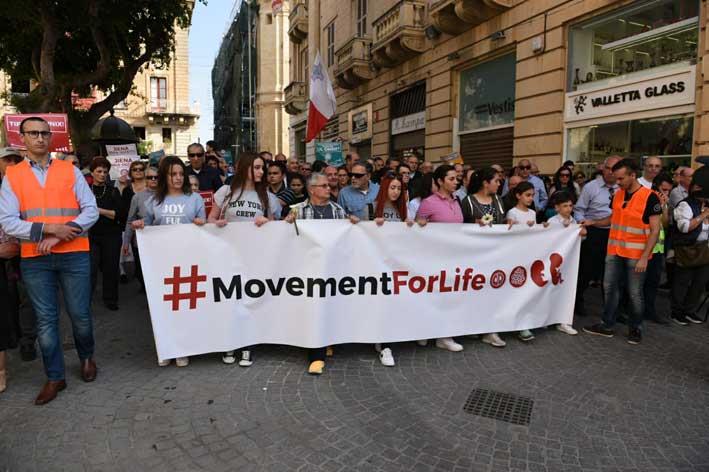 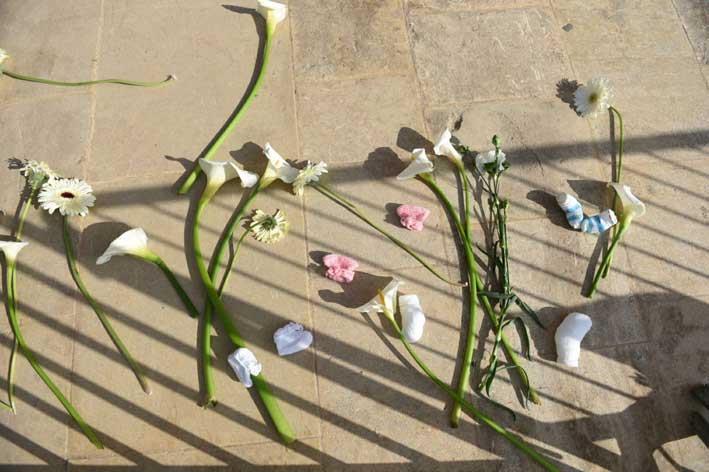 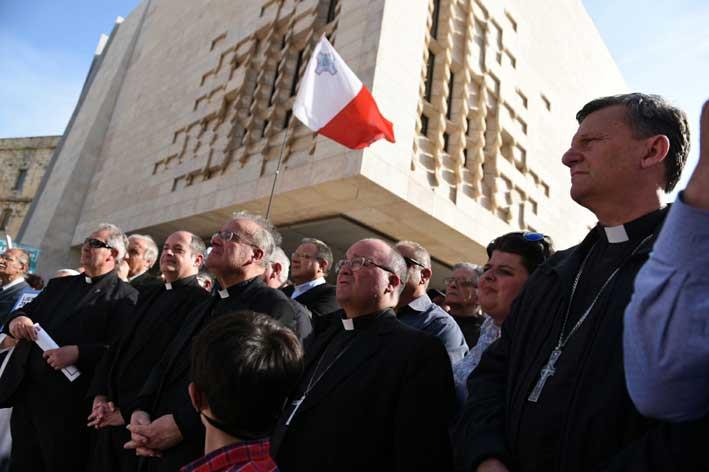 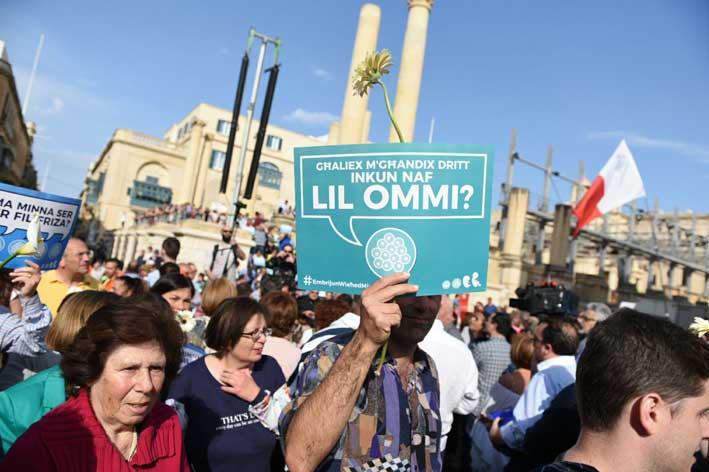 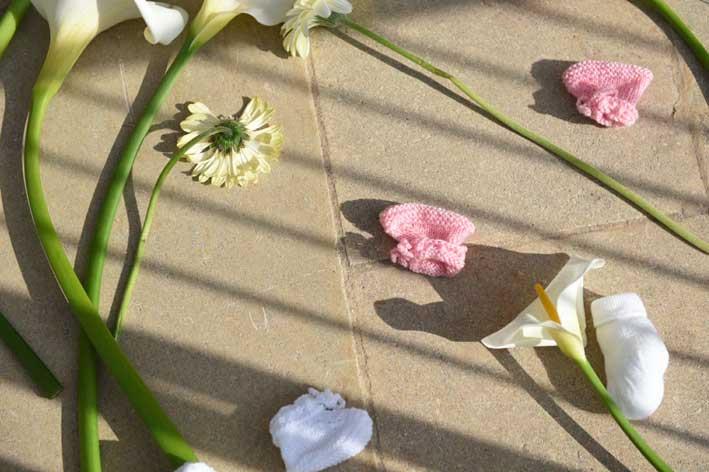 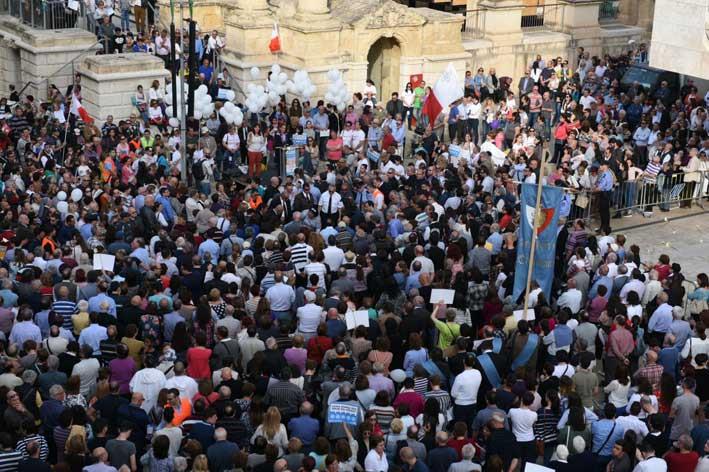 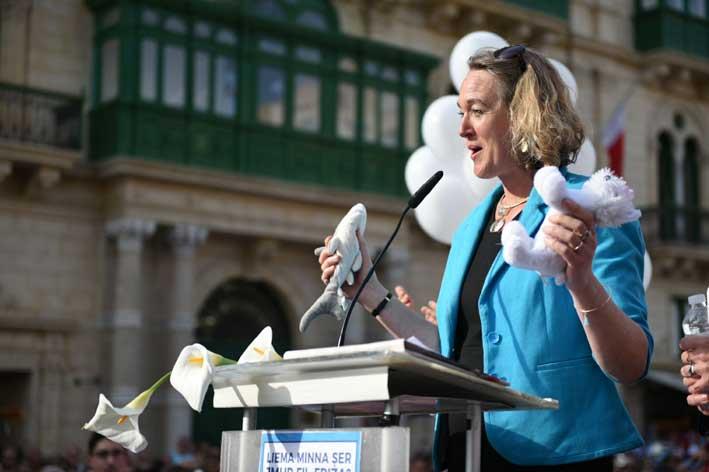 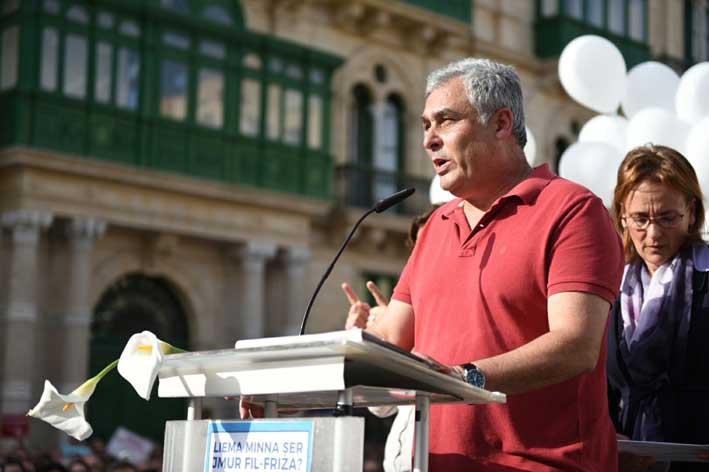 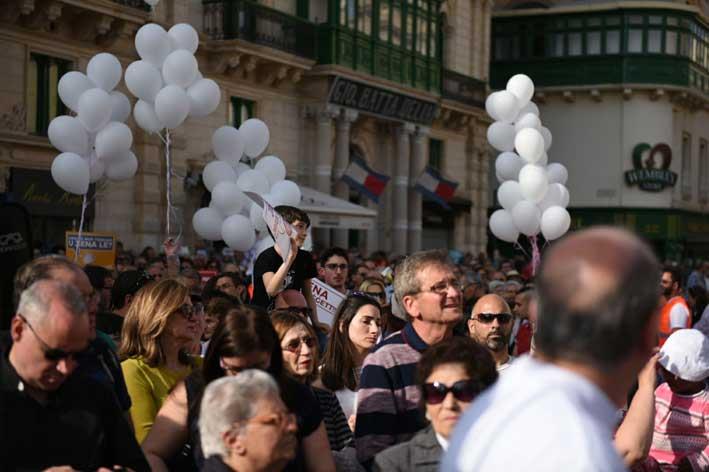 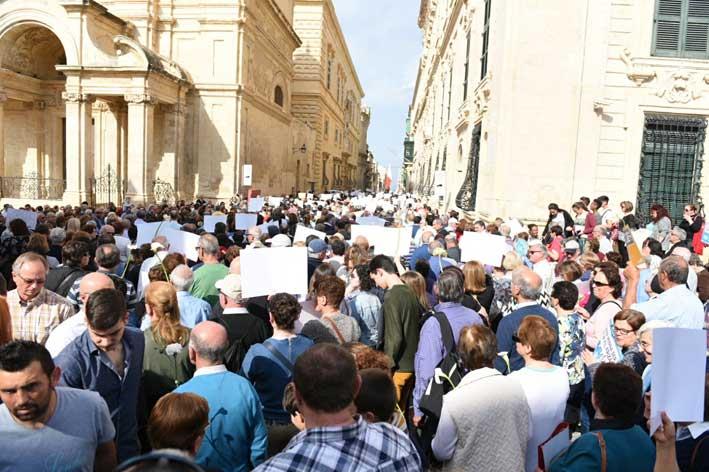 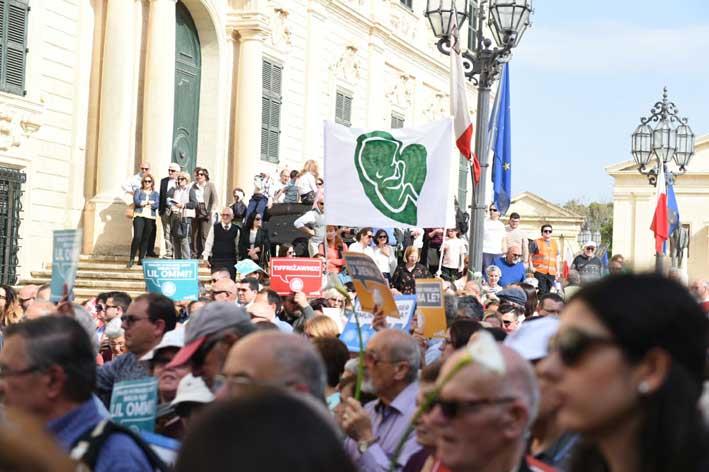 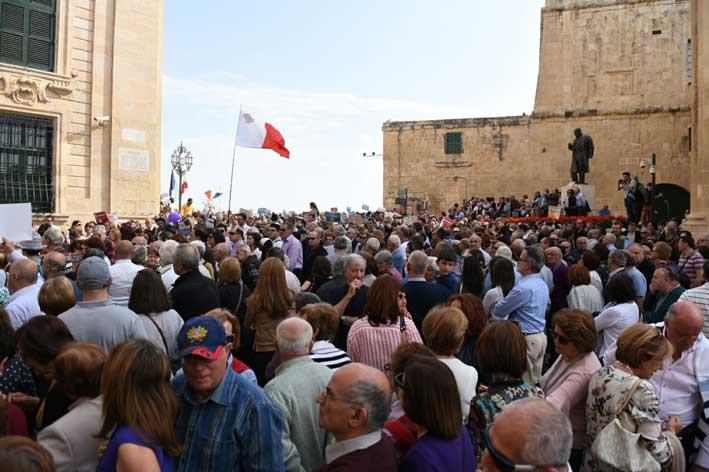