The Medical Council has told the Health Affairs Committee that the morning after pill is ‘just the tip of the iceberg’, as it expressed the concerns related to ethical, health and social issues.

Dr Doreen Cassar gave a detailed presentation before the committee which met this afternoon, explaining that the pill cannot be made available over the counter for a number of vital issues related, among other things, to health.

She explained that the pill will not work on persons of more than 77kg of weight. It can also have dangerous effects on people suffering from epilepsy or asthma.

“A doctor should always bear in mind the protection of human life, from conception till death,” Dr Cassar said before going into further detail. “We believe that the morning after pill is only the tip of the iceberg. There are major issues related to the medical history of the person requesting it. But we must go beyond the medical information.”

The Medical Council argued that it is vital for the pill giver to know the sexual history of the person. She noted that, statistics show an increase in sexually transmitted diseases. “We must ask ourselves, why didn’t the couple use any contraception? Why are they requesting the morning after pill? We must also ask if the person requesting the morning after pill came on his or her own accord, or because she or he was forced.”

The Council also insisted that the pill should be only prescribed by a medical doctor, otherwise there are serious issues one might face.

“There is also a psychological issue which one must analyse. Let’s see why these persons are not prepared to take care of a baby,” she added while saying that this pill can affect the health of the nation. 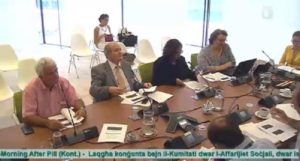 Quoting the medical schedule, Dr Cassar said that a doctor cannot prescribe something which will harm the mental and physical existence of the patient and that doctors cannot impose their views on patients.

Insisting that the morning after pill should not be given over the counter, Dr Cassar asked “if a male comes to buy the pill, who are we protecting? The child or the parents?”

Labour Party MP Etienne Grech said he agreed that the morning after pill should be given through prescription.

Finally, she concluded by calling on politicians that, since there is an element of uncertainty, they should see to “err in the side of caution”.

The report on the morning after pill will be tabled in Parliament on 10 October when Parliament resumes. Committee adjourns for Wednesday 5 October.