I refer to the article by Aleksandar Dimitrejevic entitled ‘No, we are not our DNA’, (July 25) . The author’s premise is the scientific observation that a large proportion of pre and peri-implantation embryos are lost.

The disconnected and one dimensional conclusion he draws from this significant embryonic death is that the human genome is not enough to qualify an embryo for human value (and therefore, ultimately supports the author’s view that it is permissible to abort it).

The scope of this article is to explain why I consider such a superficial analysis to lack both scientific depth as well as logical coherence.

Our genome defines our biological identity. If we could analyse the DNA of an embryo, we would know whether we are dealing with a biological male or female, as well as knowing what they would eventually look like, even at an early stage of development. There are no ‘blank’ embryos. This defined biological identity will express itself progressively through the pregnancy and after birth, as we acquire more of the features that are ‘written’ in that code.

While we are more than our biological sex and physical appearance, they are certainly an integral part of who we are as human beings. In addition, embryos are more than their DNA. They are a complete and complex organism, whose cells are rapidly multiplying and specialising into various tissues.

In the majority of the cases where embryos are lost at an early stage, this is largely attributable to significant chromosomal abnormalities (Macklon et al, 2002). The fact that they were not viable because of a life-limiting genetic condition, has no bearing whatsoever on their intrinsic humanity.

At six weeks of pregnancy, there is more than 90 per cent chance that the baby will survive

In simple terms, they died early in their development because of a genetic condition. It may be beneficial to the mother that she is unaware of this early embryonic death since this will mitigate the psychological distress of miscarriage later in the pregnancy. The fact the author concludes that their unacknowledged death strips them of moral value is merely a reflection of his personal views on human worth rather than a logical conclusion based on the evidence.

At six weeks of pregnancy, there is more than 90 per cent chance that the baby will survive since the risk of miscarriage at this stage is 9.4 per cent (Tong et al, 2008). Sixty-five per cent of first trimester abortions happen after six weeks (CDC, 2016). Therefore, more than 90 per cent of these terminations occur on viable embryos who would have probably survived till birth. So even from a purely utilitarian perspective, justifying abortion on the basis of early pregnancy loss is not only illogical but misleading.

Of course, there is an ethical dimension that clearly differentiates abortion from early embryonic death. Abortion is an intentional intervention that actively brings about the demise of these embryos, the majority of which are viable and would have otherwise been born. We become the agents of their avoidable death.

On the other hand, early embryonic loss, as a result of natural causes is largely an unavoidable consequence of chromosomal abnormalities. From an ethical point of view there is no comparison between the death of non viable embryos by natural means and the termination of viable embryos by induced abortion. 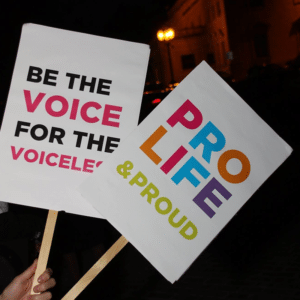 As an advocate for women’s rights, it is surprising that the author does not perceive how insensitive his words may be to mothers who have suffered a miscarriage. It is no comfort to these women, or their partners, that the author uses the miscarriage that grieves them to disqualify their son or daughter from being considered human at all.

Additionally, if the author wants to engage in a serious scientific discussion, he should not divert from science. His references to God and religion in an attempt to ride on anti-Catholic sentiment are as irrelevant as they are distasteful.

As an identical twin, I would like to conclude by agreeing with the author when he writes that we are certainly more than our DNA, while emphatically stating that we are never ‘less’ than our DNA.

This event is being held in support of Dar Tghanniqa ta’ Omm, a maternity home. Please help us by circulating, booking, and donating. Call or message on 7711 5433.

You are all invited to watch the live Broadcast of a conference happening today at noon at the EU parliament in Strasbourg. The conference entitled “Preventing Abortion in Europe” is organized by The European Centre for Law and Justice in partnership with ONE...