Modern Day Eugenics: Who Lives and Who Dies?

Home > Bio-Ethics > Modern Day Eugenics: Who Lives and Who Dies?

Modern Day Eugenics: Who Lives and Who Dies?

In the early 20th century, eugenics was widely supported among the educated classes all across the West. Eugenicists fancied themselves benefactors of the human race, putting to use the most cutting-edge science to eradicate human suffering, and to “improve” the human race.

By giving nature a helping hand, carefully encouraging the reproduction of the “fittest” members of the human race, and discouraging the reproduction of the “unfit,” eugenicists believed they could rapidly create a race of strong, healthy, and super-intelligent human beings. No longer would the state and society be burdened with “moral degenerates” (the memorable term used by eugenicist Margaret Sanger), the mentally disabled, and those prone to costly and painful diseases.

Planned Parenthood founder Margaret Sanger was an enthusiastic proponent of eugenics. She openly advocated the forcible sterilization of the unfit, and the involuntary collection of such people into internment camps, where they would spend their entire lives in forced labour. She claimed that these methods were necessary, for the sake of “peace.” In various Western countries, including the United States, some of these recommendations were carried out. In the U.S. tens of thousands of people deemed “unfit” were forcibly sterilized.

Eugenics received a huge public relations blow, however, when Hitler took its principles further than most were willing to go, killing millions of Jews, the mentally handicapped, gypsies, homosexuals, and other unwanted individuals, in the name of “purifying” the race. After Hitler’s atrocities were exposed, the less brutal, but still profoundly inhumane experiments in eugenics being carried out by other Western nations fell out of favour.

Nowadays, however, people often speak of eugenics as a thing of the past – a failed experiment.

This is wrong. Not only has eugenics not failed, but it is also a more potent force than ever before. The explosion in popularity of assisted reproduction techniques means that every day, parents all around the world choose what kind of baby they would like to have. While in some cases this is restricted only to a choice between a boy and a girl, some IVF clinics are offering to test embryos for such things as intelligence, susceptibility to certain diseases, eye colour, etc. Those embryos – human beings – that do not meet the chosen criteria are unceremoniously discarded as waste, i.e. destroyed, murdered. They are treated as commodities, products, and judged to be unequal in dignity to their parents.

The same utilitarian, commercial, and eugenic treatment of human reproduction is found in clinics that offer artificial insemination. Women or couples who choose to become pregnant in this way, must first browse catalogues of sperm donors, selecting donors for desirable characteristics such as artistic ability, IQ, physical build, looks, etc.

These forms of eugenics are dressed up in the respectability of white lab coats, and presented in the language of modern marketing and “choice.” However, the same mentality that motivated Margaret Sanger – i.e. the reduction of the value of human beings to certain qualities they possess – is present. And in the case of IVF, the end result is often the same: i.e. a dead human being.

One thinker – Garland-Thomson – refers to this modern form of eugenics as “velvet eugenics.” As the author of a recent in-depth article on the problem in The Atlantic summarizes, “Like the Velvet Revolution from which she takes the term, it’s accomplished without overt violence [Note: I disagree with her here. True, the violence is not “overt,” in the sense that it is hidden in IVF and abortion clinics; but modern eugenics is deeply violent]. But it also takes on another connotation as human reproduction becomes more and more subject to consumer choice: velvet, as in quality, high-calibre, premium-tier. Wouldn’t you want only the best for your baby—one you’re already spending tens of thousands of dollars on IVF to conceive?” 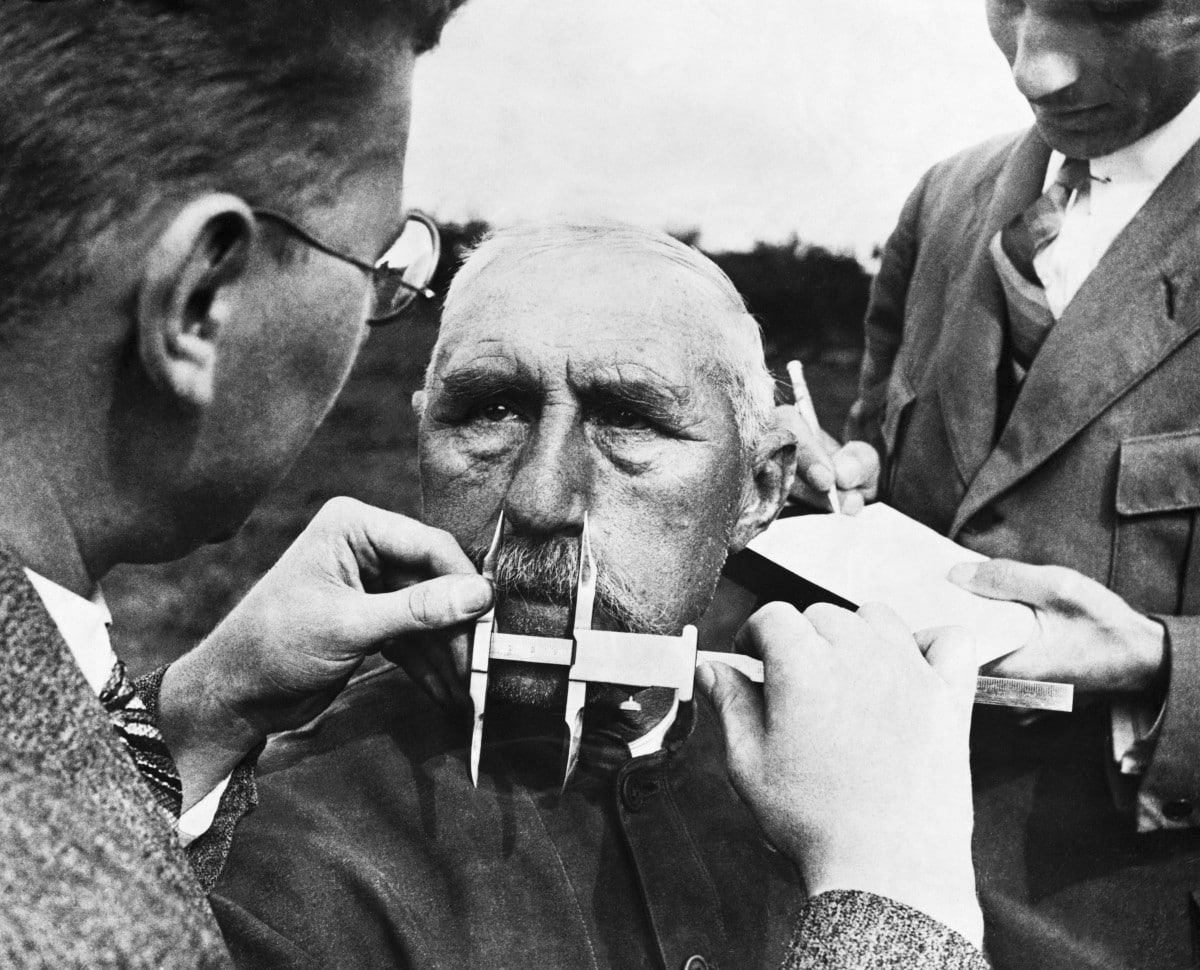 Down Syndrome: The ‘Canary in the Coal Mine’

However, one particularly brutal form of eugenics is the practice of testing unborn children for various diseases, and then, should they test positive, aborting them, often quite late in the pregnancy. While this is always a horrific evil, there is something viscerally jarring about the degree to which this has been perpetrated on people with Down syndrome.

While Down syndrome unquestionably comes with many detrimental health problems, many people with Downs also live long, productive, and happy lives. In fact, an overwhelming majority of people with Downs describe themselves as ‘happy’– far more than those without Downs. And yet, in many countries around the world, Down syndrome is practically going extinct. Some medical experts are hailing this as some kind of a medical triumph. This is a farce. If the extinction of a disease by killing everyone with that disease is a triumph, we could achieve the “miracle” of eradicating all disease in a matter of days. We don’t, because killing a person with a disease, is not a solution to that disease.

One country that has attracted a lot of attention on this issue is Denmark, in which only a tiny handful of people with Down syndrome are born every year. Many of these are born only because in utero testing failed to detect the disease, or because the parents weren’t deemed at risk, and didn’t bother getting the testing in the first place. Only rarely do the parents of a child diagnosed with Downs choose to give birth to that child.

The article in The Atlantic mentioned above provides a fascinating in-depth look into the moral quagmire of this issue. While the publication and the author are clearly pro-choice, nevertheless, the article seriously wrestles with the issue, and provides some fascinating insights and conclusions. I urge you to read it, if you have the time.

The author calls Down syndrome the “canary in the coal mine” for selective reproduction. As she writes: “Recent advances in genetics provoke anxieties about a future where parents choose what kind of child to have, or not have. But that hypothetical future is already here. It’s been here for an entire generation.”

Testing for Downs is relatively accurate, which means that a large percentage of children with Downs are detected before birth. In many Western countries, the default position is to abort that child, basing the decision on a “quality of life” definition and determining the child’s life unworthy of living.

The author of the article rightly questions why, in light of this, abortion has become the default position, and whether there may be some other way we should be looking at the issue.

One theme that emerges strongly in the article is the degree to which fear plays a part in the decision to abort. However, as the author notes, this fear often simply doesn’t match the reality of what life with a child with Downs is like. That is, when couples receive a diagnosis of Downs, their imagination often immediately leaps to the worst-case scenario. The decision to abort, to end the life of their child, is made based upon this worst-case.

As the sister of one man with Downs who was interviewed in the article notes, “If you handed any expecting parent a whole list of everything their child could possibly encounter during their entire life span—illnesses and stuff like that—then anyone would be scared.” Her mother agrees, adding, “Nobody would have a baby.”

One researcher in the U.S., David Wasserman, a critic of eugenic selective abortion, has made the excellent point that (in the words of The Atlantic author) “prenatal testing has the effect of reducing an unborn child to a single aspect—Down syndrome, for example—and making parents judge the child’s life on that alone.”

This is the dark side of our society’s pursuit of perfection, and perfect control.

Modern science comes to us wrapped in a mythology – the mythology of perfect control. This mythology promises us that if we just use the scientific method the right way, we can eradicate all pain and uncertainty in our lives. This promise in turn leads us to have certain expectations. We expect easy, predictable lives. And when science fails to deliver on its promises – as it inevitably will – our whole world is shattered.

Often, we respond by desperately seeking to wrest control back. For parents with an unborn child with Downs, this often means that they will be tempted (and often strongly encouraged by doctors and family) to “erase the problem,” instead of welcoming life, accepting the challenge to love, and experiencing the learning and personal growth that always come from embracing life’s difficulty.

The Black Heart of Eugenics

Every child should be welcomed and loved. To welcome a child into the world requires a leap of faith. It is a leap that should come with no conditions.

As the Bible tells us, every child is created in the image and likeness of God. No characteristic can alter that – no disease, no handicap, not even any sin or crime, can efface that dignity. Humans are not beasts. It is acceptable to select and breed animals for certain characteristics, since humans have authority to use animals for certain, specific purposes. But humans can never be reduced in this way to something-to-be-used. To do so is to do incomparable violence to their immeasurable value, which is not found in their usefulness, but in their being.

The author of The Atlantic article, while maintaining loyalty to the pro-choice worldview, does a decent job of highlighting the beauty and humanity of those with Downs, and contrasting it with the fear and rejection that meet children diagnosed with Downs.

The mother of one family featured in the article runs a charity intended to provide couples with accurate information about Downs. She herself has a grown son with Downs.

In the article, she describes one case where someone sent her a link to a documentary with the heartless title, Død Over Downs (“Death to Down Syndrome”). Her son, she said, was peering over her shoulder when she opened the link. When he read the title, “his face crumpled. He curled into the corner and refused to look at us. He had understood, obviously, and the distress was plain on his face.”

The author concludes, “The decisions parents make after prenatal testing are private and individual ones. But when the decisions so overwhelmingly swing one way—to abort—it does seem to reflect something more: an entire society’s judgment about the lives of people with Down syndrome. That’s what I saw reflected in Karl Emil’s face.”

As a society, we must do better than this.

Every life is precious, without exception. No life should ever be viewed as unworthy or unwelcomed.

We once believed that we destroyed the beast of eugenics on the beaches of Normandy in World War II. But we hadn’t killed it; instead, we simply thrust it underground, and then allowed it to creep back into our hospitals, laboratories, and universities. To eradicate eugenics, we must drive a knife into the very heart of its poisonous philosophy. That means that we must reject the core premise of the culture of death – that the worth of human beings can be measured by what they do, or some characteristic they have, instead of what they are. Instead of expanding our sense of control, we must expand our hearts. We must help parents of children diagnosed with Downs, and other diseases, to reject fear, and live in hope, the hope that comes of unconditional love.